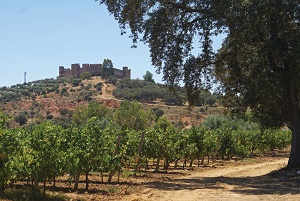 SETTING
The village of Terena, situated in the territory of Alandroal, is one of the best kept secrets of the Alentejo. It’s as though time stopped, as if wanting to leave an imprint of a very important historic past, as evidenced by the testimony of so many times and so many civilizations, highlighting the best heritage of the pre-Christian God Endovelicus and the strategic position of the border with Spain, with a vital need for defence and settlement

THE WALKING TRAIL
Leave Largo do Castelo (the castle’s square), passing in front of the clock tower and pillory. Follow through the village of Terena, passing by the São Pedro church toward the entrance of the cemetery. Turn right and walk down the street toward the national highway 255 to then turn left, circling its curb until you reach the first turn, where you will take a dirt path that follows straight through Horta do Professor. Make the gentle climb all the way to the top, passing a cattle gate with a metal grid on the floor, until you reach a crossroad in the middle of the terrain. Turn right at a tight angle and then through the forests of cork trees, on the dirt path, which at one point makes a left turn followed by another to the right.

Go straight through the terrain, passing through another cattle gate until you reach the paved municipal road where you must turn left and follow through the curb for about one kilometre, to then re-enter the forest, near the entrance to Monte da Coutada, where you will see a large cork oak. Head north, through the cork and holm oaks followed by extensive farmlands and small vegetable gardens. See the Albufeira de Lucefécit (reservoir) and take a left toward its dam, passing over two water-retaining walls. Walk along the wall of the dam and go see the unloading systems, where you have an excellent view over the water body, with the Terena Castle as backdrop.

Go back to the path of access to the national road. Take a detour to the left, by the side of the road followed by a dirt path, to see the old bridge of Terena and then turn back, passing along the electrical substation. You can take the left, between the vineyard and the road. After the Ribeira da Cruz Bridge, turn left and follow the irrigation channel to see the Fortress Temple of Nossa Senhora da Boa Nova to the right, where you must turn into. Visit the Sanctuary and ask that it be opened, at the house opposite to it. Follow the paved road, passing the Cruzeiros, and after a gentle climb you will reach the cemetery and enter the village of Terena to return to the starting point.

If you would like to be accompanied by a guide please contact:
SAL Sistemas de Ar Livre >>> http://bit.ly/2ohxcUd

SUGGESTIONS OF CONDUCT AND SAFETY
- Go on your tour as a group. If you are walking alone, leave behind the information on the trails you are going to take.
- In organized tours, always observe the indications of guides.
- Choose the area of your tour for spending the night, taking your meals and shopping. Greet and mingle with the locals.
- Use suitable clothing and footwear. Take sufficient water and food for the day, as well as means of communication and a first-aid kit.
- Take only the marked trails and respect private and public property. Leave the gates as found when you pass them.
- Avoid mineral or vegetable sampling and the disturbance of wild life and livestock, keeping as far as possible.
- Use caution when crossing hazardous  locations. When in doubt, go back.
- Take the utmost care when crossing roads, streets and railway lines.
- Respect the surrounding nature. Avoid using shocking colours and making unnecessary noises.
- Take your garbage and place it in appropriate containers at the site where you purchased the goods that gave rise to this garbage.
- Do not make fire. Avoid smoking or do it only at the stops.

Heranças do Alentejo were once again present in the largest tourism fair in Portugal, BTL, which took place at FIL between 15 and 19 March.

Traditional market and bric-a-brac - Every first Sunday of every month.